The health and well-being of patients is our highest priority.
Now offering telemedicine appointments so you can receive quality care from the comfort and safety of your home.

“Creating and maintaining vitality and well being are about being able to adapt to physiologic and emotional stress.”

Alex Berks was diagnosed with a high grade pleomorphic sarcoma (a rare soft tissue cancer) in March of 2010. A few months prior to receiving this diagnosis he had been having pain in his right hamstring. He thought it was a pulled muscle. On New Years Day, 2010 he caught a cold that led to asthma and general fatigue. He went to a doctor who put him on antibiotics for an infection in his lungs. She also looked at his leg and suggested he might see a vascular surgeon. A few weeks later his breathing had not improved and so he went to see a pulmonologist who treated his asthma more aggressively. At the same time, he continued his efforts to heal his hamstring, which included a visit to a physical therapist. The physical therapist referred him to an orthopedist who sent him for an MRI immediately that evening. The diagnosis was sarcoma. Alex underwent chemotherapy and radiation from March to June, and finally had surgery in June on a 15 pound tumor that had grown so big as to render him in a wheelchair until the tumor was removed. He took a plethora of herbs and supplements throughout, and the good news was that the tumor was 99% dead when it was taken out and a CT scan of his lungs was negative for sarcoma. Alex was beginning to walk again and would spend the next 9 months reclaiming his life and doing everything he could to prevent a recurrence. He also continued his dedication to helping other cancer patients.

In March of 2011, a year after his initial diagnosis, three small sarcomas were found in his lung. They were growing slowly. Alex opted for radiofrequency ablation on one of them due to its location. As a result of the procedure he suffered a collapsed lung, so it was decided to try another treatment. Due to the location of the third growth (in the right lower lobe of his lung) he decided to do surgery. In June of 2011, Alex underwent a lung resection with a world renowned thoracic surgeon, Dr. McKenna. Everything went well and he started to recover. During this time, because of his work in cancer, and specifically with the Mederi Foundation and his mentor, Don Yance, Alex was also getting blood markers done regularly (not a standard practice for sarcoma in Western medicine). His blood markers did not look good, so with the guidance of his mentor’s program, Alex was taking specific herbs, supplements and even drugs to work on the pathways that are known at this time to be markers for cancer. Following lung surgery, Alex had a cough that lingered and seemed to be part of his recovery process. However, the cough persisted for months and in October it was clear that the cough signified more than just post-surgical recovery. A CT scan was given, showing a big mass in his right lung. Most all doctors agreed that is was pneumonia. He was put on antibiotics for two weeks. He got a little better and was well enough to take a trip to Sedona, Arizona with his wife, Denise. When he came back he had a chest x-ray that showed the pneumonia was still there. He was given more antibiotics but he was getting worse and having difficulty breathing. At this point he was given a bronchoscopy and was diagnosed with blockage pneumonia due to sarcoma. The doctors decided to try photodynamic therapy, whereby a radioactive dye is injected into the body. For one month afterwards, the doctors asked that he stay out of the sun and wear protective clothing because of the risk of burning. After the procedure, Alex was kept in the hospital for two days because of a fever and breathing difficulty. Two days later, the surgeon went back in to clean up the debris with another bronchoscopy. When he went in for the second procedure, the surgeon discovered that the tumor was bigger than he could treat and that the pneumonia had spread to his left lung. The surgeon came out to tell Denise that she should call their kids and close family to say goodbye, because he didn’t think Alex would make it. 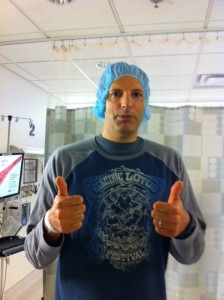 Alex remained hospitalized in the ICU for pneumonia in both his left and right lung. He was breathing with a bi-pap machine and put on heavy antibiotics. He stayed in the hospital for three weeks and was treated with natural medicine concurrently. The doctors were surprised when Alex was released to go home for palliative care. There was nothing more the doctors could do for Alex. He was not a candidate for surgery, radiation, or chemotherapy. He was too sick. If he didn’t do something the tumor would kill him. He went home to try and get stronger so he could do metronomic chemotherapy, which is low dose chemo given more frequently. This had been recommended to him by his complimentary medicine program. He had been home from the hospital for a week when he started to retain water in his abdomen, legs and right arm. Diuretics were not helping. On Monday, December 26th, 2011, he started to not make sense. His wife called 911 and he was promptly admitted to St. John’s hospital. His sodium levels were extremely low and his doctors devised a plan to get rid of the water and help balance his electrolytes. In the course of his stay at St. John’s, another oncologist was consulted on Alex’s condition. Coming out of this consultation, the decision was made to do in-house low dose chemotherapy. The choices were do something or watch him die. On December 31st, he received his first dose of chemotherapy. On January 1st he passed away. The autopsy showed that the tumor was 40 cm. It took over his whole right lung and was pushing on his vena-cava and not allowing blood flow back into his heart. They also found pneumonia in his lower left lobe and micro-metastasis to his left lymph nodes in his lungs.

Alex was a strong, courageous man battling a very aggressive cancer. He will be greatly missed by his wife, his two sons, his family, his friends and his patients. Denise will take on his passion for treating cancer and will continue her studies with his mentor in Ashland, Oregon.

A prayer: I give thanks to all those who have come before me, who have suffered and learned and took on a new wisdom. I ask for forgiveness, self-forgiveness, ease and presence so that I may be carried on this journey, guided divinely, honored and blessed.

Alex continues his studies in both Eastern and Western medicine to integrate both into his patient care.

Alex Studies with Randine Lewis, author of the “Infertility Cure;” and with Donald Yance, author of “Herbs Healing and Cancer” He has given evidence-based lectures on the scientific understanding of acupuncture and its role in obstetrics and gynecology and the role of herbal medicine in cancer patient support. 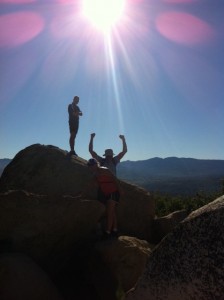 Alex also focuses his practice on the support of cancer patients. He works with cancer patients in all stages of treatment to offer complementary care that improves quality of life, ameliorates side-effects of conventional care and improves all body systems.

Alex also provides pain treatments for orthopedic conditions. He has been the Acupuncture Doctor at various orthopedic and pain management clinics. In addition to his practice, he has taught Nutrition, Practice Management, and Shiatsu and at the American University of Complementary Medicine and is a clinic supervisor at Emperor’s College of Traditional Chinese Medicine.

Alex spent five years as a Senior Herbalist at Elixir Tonics and Teas, advising clients on their health and herbal programs. He also helped research Elixir products and was interviewed on radio and television. Prior to his medical career he practiced bodywork and taught yoga for more than 10 years. He is the father of 2 boys and an athlete.

He is the publisher of the blog Healthwithcancer.blogspot.com and is the newsgroup forum director for the American Association of Physical Oriental Medicine (AAPOM).

Located in the Gardens Building